Watch as author James Grady sends his congrats for the Smithsonian Libraries’ 50th anniversary and tells us why he loves libraries.

James Grady is a New York Times and #1 internationally best-selling author of thriller, police procedural, and espionage novels. He is most well-known for “Six Days of the Condor,” which was adapted to film as “Three Days of the Condor” starring Robert Redford and Faye Dunaway in 1975. 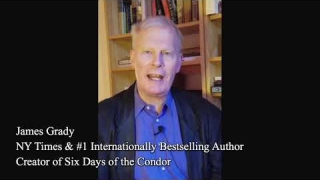