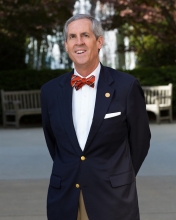 After completing his B.A. and M.A. in English at Wake Forest University, Mr. Manning began his teaching career in 1984 at Woodberry Forest School, where he taught English, coached basketball and tennis, and served as a dorm parent.  He was later appointed Associate Headmaster; Director of College Counseling; Director of Summer Programs; and AP English teacher.  In the school's centennial year, 1989, Mr. Manning received the outstanding teaching award, the George R. O'Connor Prize for Excellence in Teaching.

In 1991, Mr. Manning was named Dean of Freshmen at Washington and Lee University where he also served as Instructor in English, teaching freshman courses in composition and literature.  He was appointed by the College Board and the Advanced Placement program as a Table Leader for the AP English Literature examination.  During his years in Lexington, Mr. Manning also pursued further graduate work in English and higher education at the University of Virginia.  Mr. Manning was twice chosen to give the Senior Address to graduating classes at Washington and Lee, in 1995 (the first freshman class he served as dean) and in 1998.  He was also named to the North Carolina Governor's Institute through which he worked with a team of college administrators, as well as a professor and researcher at Duke Medical Center, to assess patterns of alcohol and substance use on college campuses.  In 1998, Mr. Manning was awarded the Dr. William W. Pusey III Award by the Student Body at Washington and Lee. In 1998, Mr. Manning was named headmaster of The American School in England, where he also taught senior English.  During his years in England, Mr. Manning worked closely with the Board and campus architect, Professor David Mayernik of the University of Notre Dame, on a comprehensive campus master plan.

In 2001, Mr. Manning followed Mr. John Tucker and Mr. J.B. Massey as just the third headmaster of Norfolk Academy since the end of the Second World War.  In 2003 the school launched the largest campaign in its history, The Campaign for the Fourth Century, a $40 million dollar fund-raising effort, to support the most ambitious building projects on the site in nearly 50 years—the Tucker Arts Center and Athletic Pavilion.  Mr. Manning has served on the Wake Forest University Board of Visitors; the Virginia Association of Independent Schools Board of Directors.  Mr. Manning is currently serving on The American School in Switzerland Board of Trustees, the Smithsonian Libraries Advisory Board, and as Treasurer on the Southern Association of Independent Schools Board of Trustees.  He is past President of the Norfolk Forum, the longest-standing public speaking forum in the country.  Mr. Manning and his wife Beth (B.A., Wake Forest; M.A., University of Virginia) have two children, Will, a graduate of Johns Hopkins University and editor in New York City, and daughter Mary Heath, a sophomore at Princeton University.