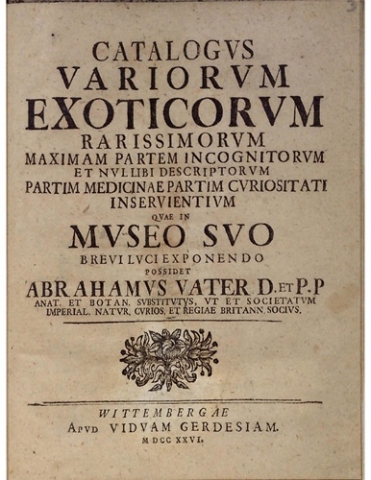 This is an extremely rare catalogue of a private natural-history collection in the early 18th century, not held by any other library in North America. Abraham Vater (1684-1751) was a German physician and professor of medicine and anatomy at the University of Wittenberg. In that connection he also studied botany and pharmacology and published a catalog of plants in the University's botanical garden. Following immediately on that he published the catalog of his own private collection of natural-history specimens, primarily plants and seeds, but also plant products like resins and gums, as well as other exotic items like bezoar stones (thought to be magical and a universal antidote to poisons, but later determined to be, most commonly, hairballs from the stomachs of ruminants). Early "cabinet collections" like Vater's are the predecessors of modern museums, and their published catalogues provide important information about the actual specimens that naturalists used in forming their ideas about the nature of the world we live in and the processes that shape and change it. Smithsonian Libraries actively collects such publications for researchers at the National Museum of Natural History.