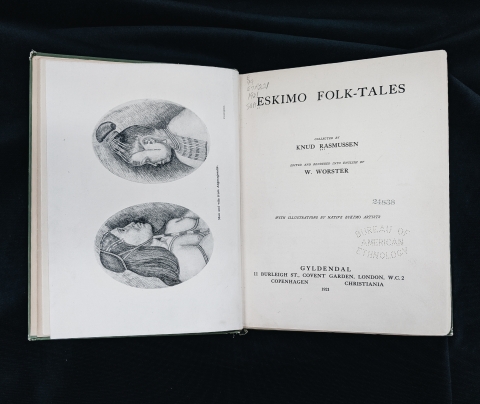 Eskimo folk-tales, collected by Knud Rasmussen, ed. and rendered into English by W. Worster, with illustrations by native Eskimo artists.

Published in 1921, Eskimo Folk-Tales is a collection of stories told by Greenlandic Inuit to esteemed polar explorer and anthropologist, Knud Rasmussen. Born in Greenland to a Danish father and Inuit mother, Rasmussen grew up in an Arctic Inuit community, where he learned Kalaallisut (Western Greenlandic, the native tongue) and worked with hunters driving dog sleds. In addition to leading six research expeditions – each with its own purpose, from geographic survey to ethnographic study – Rasmussen was the first European to traverse the Northwest Passage via dog sled. Widely considered the “father of Eskimology”, it is little wonder that Inuit storytellers would trust him to record their stories. Translated from Kalaallisut into Danish and finally English, these fables offer insight into the Arctic Inuit worldview, as well as their own narrative traditions. Interspersed throughout the text are drawings by Inuit artists, depicting daily life as well as illustrations of the stories themselves.