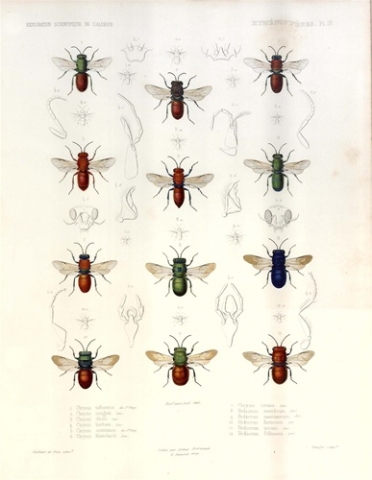 Conceived and directed by the naturalist Bory de Saint Vincent, one of the first modern, systematic biological surveys of northern Africa was undertaken by the French government in the early 1840s and resulted in a multi-volume series of scientific publications under the title of the Exploration Scientifique de l'Algérie. The botanical and zoological volumes of this important expedition are of particular interest to researchers at NMNH, since they contain numerous descriptions of species new to science, but SIL's holdings of the set were incomplete. Hippolyte Pierre Lucas (1814-1899) was an entomologist at the Muséum d'Histoire Naturelle in Paris; he participated in the Algerian expedition from late 1839 to early 1842 and worked up the invertebrate collections for publication in three volumes: one on crustacea, arachnids, myriapods, and hexapods 1849 [i.e., 1846], and two volumes on insects [1846]-1849. The atlas contains 122 beautifully detailed and superbly produced hand-colored engravings.