Adopted for Conservation by
Amy Threefoot Valeiras
In honor of Steven Threefoot
on November 16, 2016 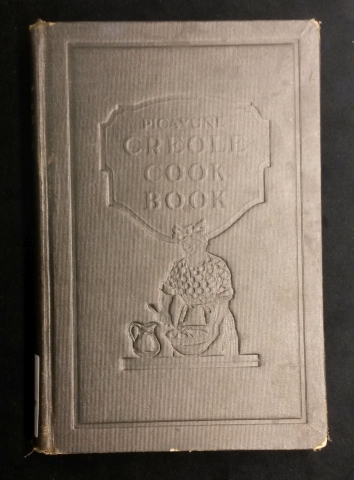 “Other cook books have lived and had their day, and possessed merit, perhaps, but what one of them was it that was ever the embodiment of a time filled with romance?” asks the introduction to the eighth edition of this remarkable cookbook, a celebration of New Orleans’ cuisine. The recipes were carefully compiled as part of an effort to preserve traditional Creole cooking with the cookbook first published in 1900 by the Times-Picayune, the New Orleans newspaper. It became the definitive guide to Creole cooking and has been continually re-published in new editions, most recently in 1989. This, the eighth edition, was the first published after prohibition was lifted as part of the boom in post-prohibition recipes that included alcohol. (The fifth edition was the last edition published before prohibition). Looking for authentic New Orleans recipes? “Here they are – the time-tested, the incomparable! Nowhere is there anything like it.”

An early-20th century cookbook in a black publisher's cloth binding. The front cover is blind stamped. The sewing is intact, but the textblock is separating from the cover. Conservators will remove the textblock, reline the spine, and re-case the textblock in the original case.