Adopted for Conservation by
Jacqueline Vossler
on November 7, 2017 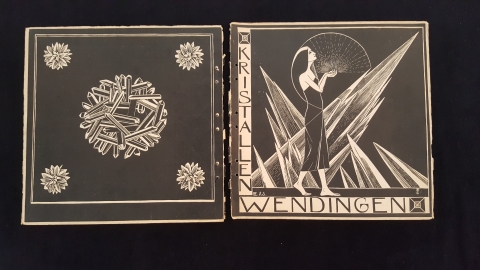 Wendingen (Dutch:Inversions / Upheaval) was an art magazine published from 1918 to 1932. It was a monthly publication aimed at architects and interior designers, and included discussions on graphics, sculpture, ceramics, glass, and theatrical design. The magazine gained recognition not only through its content but also by its remarkable square format, striking typography, and beautiful covers. In 1924, vol. 6 no.11-12 focused on crystals, which Hendricus Theodorus Wijdeveld (1885-1987), designer and chief editor, considered as the “raw material for the building of temples.” Crystals, symbols of a higher geometric order, reappear as motifs in several issues, which culminate in the Bernard Esser’s (1893-1945) cover of a serene barefoot woman in a black dress walking in a crystal landscape.

This is an early 20th century paper bound magazine. The covers are detached and the Japanese style side sewing is missing. There are paper tears along the edge of the cover and spine. Conservators will repair the tears to the cover. The Japanese side sewing will be re-created using the example of other Wendingen issues in our collection. A custom enclosure will be made to house this fragile item.