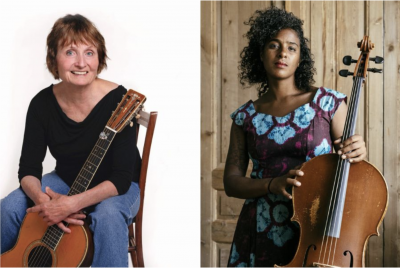 During the Smithsonian Folklife Festival, Smithsonian Folkways Recordings, Smithsonian Libraries and Archives, and the Smithsonian’s American Women's History Initiative co-present an evening with two of the most inspired—and inspiring—voices of their respective generations. Widely recognized as an old-time and bluegrass music icon, Alice Gerrard plays in a style that has been called “traditional, never conventional.” Since beginning her recording career with singer Hazel Dickens in the late 1960s, Gerrard has achieved legendary status for her expressive voice, powerful songwriting, brilliant interpretive skills, and mastery of the guitar, fiddle, and banjo. Smithsonian Folkways will be reissuing the duo’s groundbreaking first two LPs in 2022.

Singer, songwriter, and multi-instrumentalist Leyla McCalla is deeply influenced by traditional Creole, Cajun, and Haitian music, as well as by American jazz and folk. Whether singing in French, Haitian Creole, or English, her work is at once earthy, elegant, soulful, and witty. It vibrates with three centuries of history, yet also feels strikingly fresh, distinctive, and contemporary. McCalla is a member of Our Native Daughters and released Vari-Colored Songs, a tribute to Langston Hughes, on Smithsonian Folkways in 2020.

The inaugural season of Folkways@Folklife is dedicated to our dear colleague, audio engineer, and sound production supervisor Pete Reiniger (1949–2022).

**This event occurs live on the National Mall, streaming worldwide via YouTube**