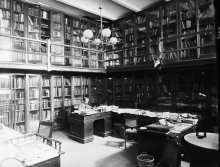 The Smithsonian Institution Libraries is a system of 20 branch libraries and central support services that include a Book Conservation Laboratory and an Imaging Center. Branches are located in Smithsonian museums, research institutes and offices in Washington, D.C., New York City, Edgewater and Suitland, Maryland, and the Republic of Panama.

In his will, written in 1826, English scientist James Smithson left over $500,000 to the United States of America to establish in Washington an institution "for the increase and diffusion of knowledge." An Act of Congress dated 10 August 1846 established the Smithsonian Institution as a trust instrumentality of the United States, created a Board of Regents, and called for a building to house a museum with geological and mineralogical cabinets, a chemical laboratory, a gallery of art, lecture rooms, and a library. In ten years of debate preceding the act, some of the most vocal congressional members argued for the creation of a national library and saw to it that both the new institution and the Library of Congress were given copyright deposit status. The Board of Regents selected American physicist Joseph Henry as the first Secretary of the fledgling enterprise and directed Henry to hire Charles Coffin Jewett, well-known bookman and librarian at Brown University, as the first Assistant Secretary in charge of the library.

A strong advocate of American science, Henry preferred to use the bequest to support basic scientific research by supplying serious scientists with funding, equipment, training, and books, and publishing of their research results in a new series called "Smithsonian Contributions to Knowledge." He led the Smithsonian into the existing global network of scientific communication by establishing a publications exchange program with the world's leading scientific and learned societies. He supported Jewett's plans for creating a centralized bibliographic service and for surveying the nation's libraries. However, Henry clashed with his librarian over the nature and size of a library, fearing that the costs of housing, binding, and maintenance would consume the income from the Smithson fund. Following an intense public dispute, Henry fired Jewett in 1855. Copyright deposit status ended three years later.

In 1866 following two damaging fires in the Smithsonian building ("the Castle"), Henry negotiated with the Joint Committee on the Library of Congress (LC) to move the Smithsonian's library, by then numbering 40,000 volumes and one of the largest in the nation, to the newly constructed fireproof rooms of the congressional library in the U.S. Capitol. The Smithsonian retained ownership of the collection, however, and it became known as the Smithsonian Deposit. Congress directed LC to keep the scientific portion in separate quarters and to give Smithsonian staff the same borrowing privileges as were enjoyed by Members of Congress. Further, Congress gave LC two new staff positions to support the Deposit. The Smithsonian agreed to continue to build the extraordinary collection of scientific transactions and proceedings through its International Exchange Program. The Institution considered the Smithsonian Deposit to be its Main Library for close to a century and included its holdings in reports of total collection size.

By 1897 when the Library of Congress's first building opened, the Deposit held nearly half a million volumes. Among the Smithsonian's continuing contributions was the 1931 deposit of the Langley Aeronautical Collection, named for Samuel P. Langley, the Institution's third Secretary. An LC Smithsonian Division, formed in 1900, cared for the collection until 1944. When the new LC Science Division was created in 1949, the nearly 600,000-volume Deposit became one of its principal holdings. Each time a new Librarian of Congress or new Smithsonian Secretary took office, staff raised questions about the arrangements for the Deposit. As the collection grew, the Library of Congress found it increasingly difficult to maintain. Furthermore, in a 1953 analysis, Jerold Orne reported that other than in society publications, LC's science collections were greatly lacking, particularly in historical works from the 16th to 18th centuries. Because LC depended on the Deposit as its science collection, the Library's priorities for collection expenditure had been in other areas. Now the Library wanted to build a strong national science collection.

In 1953, Smithsonian Secretary Leonard Carmichael agreed to Librarian of Congress Luther Evans's request first to integrate the Deposit volumes into LC's collections and then several years later to discontinue applying Deposit bookplates to new transfers. While the Smithsonian essentially waived control of the Deposit, it never officially relinquished ownership. Today, in 2000, the Smithsonian regularly borrows many of the Deposit, as well as other, books from LC and the two institutions maintain a close, collegial relationship.

Upon Henry's death in 1878, Assistant Secretary Spencer Fullerton Baird was named Secretary. Long responsible both for managing the publications exchange program and for building the museum side of the Institution, Baird understood the curator's need to have books and journals in close proximity to specimen and artifact collections. Overcrowded conditions in the Library of Congress made retrieval of Deposit volumes extremely difficult. After the Smithsonian's U.S. National Museum (now the Arts & Industries Building) opened in 1881, Baird donated his extensive personal library to establish the U.S. National Museum (USNM) Library and placed zoologist Frederick W. True in charge. He asked exchange program staff to acquire two copies of society publications, one for the Deposit and one for the museum, and to obtain back issues of the most important scientific proceedings. This is the genesis of today's Smithsonian Institution Libraries.

After Jewett's dismissal in 1855, Henry chose not to name a librarian, but assigned Miss Jane Turner, the first female employee at the Institution, to keep the accession records for books. Smithsonian zoologist Theodore M. Gill was named "assistant to the national library" and took charge of the Deposit when it moved to LC. Thus began the custom of LC's support of the salaries of the person regarded as the Smithsonian's chief librarian, and an assistant librarian, who kept the records of receipts for both Deposit transfers and what was to be retained at the Institution. The custom continued for another 50 years. Most often the librarian was drawn from the curatorial ranks. These included a distinguished scholar of Oriental antiquities, Cyrus W. Adler (1892-1908), and zoologist Frederick W. True (1911-1914), both of whom bore the title Assistant Secretary in Charge of Library and Exchanges. Assistant librarian Paul Brockett directed operations from 1914 to 1925, after which English professor William L. Corbin was appointed as librarian (1924-1942). Promoted to librarian in 1942, Leila F. Clark served until 1957 and was the first to hold a library degree. Ruth E. Blanchard succeeded (1957-1964), followed by Mary A. Huffer, who served as acting librarian until 1967.

Library collections at the Smithsonian were never housed centrally. In addition to the central reference section of the USNM Library, Baird created thirteen sectional "working" libraries in curatorial areas (eventually swelling to 35) for volumes directly associated with a curator's research. Apart from the exchange program, individual curators most often decided what to acquire. Books and journals unrelated to museum collections accumulated in a Secretary's Library, Office Library, Employee's Library, and in new units, such as the National Zoological Park and the Astrophysical Observatory, as they moved to new facilities. By 1964, apart from the Smithsonian deposit, a prospective user could find libraries containing over 430,000 volumes in nearly 80 locations in the Smithsonian, spread among seven cities.

It became clear that, as the Smithsonian's research and education programs and staff expanded, and as new facilities continued to evolve from the original museum, the Institution had grown too large to be supported in such an eclectic and idiosyncratic manner. Smithsonian staff demands for resources were far greater than could be supplied by total dependence on external collections, even those of the Library of Congress or other national libraries. Duplication of collections and effort wasted staff and fiscal resources and inhibited efficient services.

When Secretary S. Dillon Ripley assumed office in 1964, he quickly determined that the Smithsonian library organization badly needed an overhaul. He hired Russell Shank (1968-1977) to report directly to him in the new high-level position of Director of the Smithsonian Institution Libraries (SIL). Shank wrote that "the richness of the libraries' collections far exceeds my expectations, especially in natural history....The depth of the collections in systematic biology in terms of both age and comprehensiveness makes one felt like a bibliothecal Midas when wandering through the stacks." However, library staffing had not kept pace with the dispersion of the collections, which in any case had gone astray too far for effective management. Acquisition policies were needed to control the influx of materials. Well over half the estimated 600,000 holdings were uncataloged and large portions were deteriorated and in disarray.

Although hampered initially by a downturn in federal budget support, Shank forged ahead to reorganize the staff and consolidate, rationalize, and automate operations and collections, thereby creating a unified system with central support services and a union catalog. SIL began using OCLC and switched from Dewey to the LC classification system. By 1977 when Shank left for a prestigious university system, the quality and research value of the scientific collections were recognized nationally, and the Association of Research Libraries, whose members comprised the most prestigious research and national libraries in the United States, invited SIL to join. Subsequently, SIL won a permanent seat on the executive board of the Federal Libraries and Information Centers Coordinating Committee.

While Smithsonian Libraries' primary mission has always been to support the research and information needs of Smithsonian staff and affiliates, in the 1990s the Libraries embraced the growing Smithsonian emphasis on education and outreach and worked hard to make its collections more visible and useful to a growing public constituency. At the same time, it shared with other libraries the fiscal constraints fueled by rising serials prices and automation costs, combined with static or reduced budgets. Like its sister institutions, the Libraries incorporated the electronic world into its collections and activities and used the Internet as a vehicle for sharing its collections and services.

In the 1980s, the Smithsonian began to acquire several significant new artifact collections, which prompted new museums covering the fields of African art, philately and postal history, and the American Indian, each requiring a new branch library under the Smithsonian Libraries umbrella.

Shank's successor, Robert Maloy (1979-1987), implemented the Libraries' first online public access catalog in 1985 and embarked on a decade-long project of retrospective conversion and arrearage cataloging. Staff completed the project in 1999 with records for 97 percent of Smithsonian Libraries holdings available on the Internet through the Smithsonian Institution Research Information System (SIRIS). With a gift of 10,000 scientific rare books and manuscripts from the Burndy Library in 1976, the Smithsonian created the Dibner Library of the History of Science and Technology. In 2002, the Joseph F. Cullman 3rd Library of Natural History became the second large rare book repository when it opened in the National Museum of Natural History. A New Media Office, organized in 2001, operates an imaging center that produces electronic editions of rare scientific works and other specialized collections for use on the Internet. Since 1991, the Smithsonian Libraries Exhibition Gallery has featured our volumes in thematic exhibitions ranging from the history of ballooning to the works of John James Audubon, world's fairs, science and the artist's book, and building the Panama Canal. In May 2002, SIL opened "Odyssey in Print: Adventures in Smithsonian Libraries" to showcase the breadth and depth of its rare, unusual, and attractive holdings. Each exhibition is accompanied by an online version.

Director Barbara J. Smith (1989-1997) paved the way for the Libraries' participation in the Smithsonian's first capital campaign. Current Director Nancy E. Gwinn expanded our outreach by creating the Smithsonian Libraries Advisory Board to assist with fund-raising and the Spencer Baird Society, a vehicle for donor recognition and annual giving. The Libraries has embraced the Institution's new emphasis, as the world's largest museum and research complex, on expanding its educational outreach to encompass the nation in the 21st century.