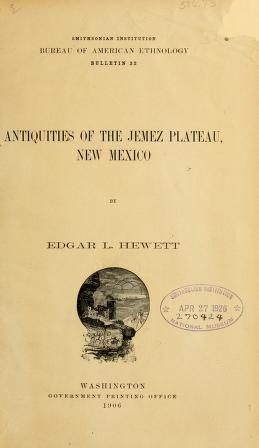 Prominent among the publication efforts of the Smithsonian Institution as well as within the Libraries' collections are the works of the Bureau of American Ethnology (BAE). Established by Congress within the Smithsonian Institution in 1879, the Bureau of American Ethnology (initially the Bureau of Ethnology) was given the responsibility to conduct "anthropologic researches among the North American Indians" (Bureau of Ethnology, 1st Ann. Rep., xi) at a time when change was occurring very rapidly. The effort that followed lasted nearly a century and played a defining role in the development of American anthropology as a discipline.
Read More

Among the initial texts selected for the Libraries' first online re-prints is John Ewers's scholarly paper, Hair Pipes in Plains Indian Adornment, Bulletin No. 164. Published as an Anthropological Paper within the BAE series in 1957, Ewers presents a short but comprehensive discussion on the history, manufacture, uses, and meanings of these ornaments. In doing so, he uses both published and archival references, verbal testimony of Indian informants, and the careful study of ethnological objects, drawings, paintings, and photographs.

-adapted from original introduction by Margaret Dittemore, Anthropology Library, to the first online version of BAE no. 164 created by Smithsonian Libraries in 1996