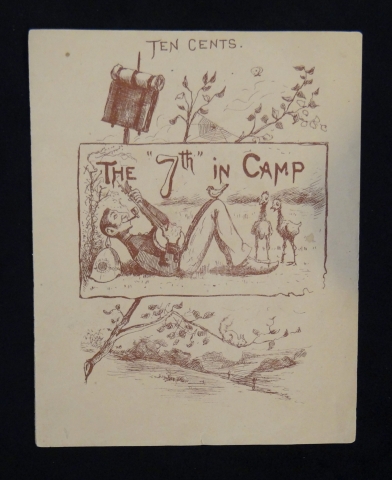 This is an incredibly rare booklet of 12 cartoons depicting the daily life of the 7th regiment as they reside at camp, likely during the American Civil War. Satirical and jovial in nature, these etchings trace one day’s activities, possibly of the New York 7th Infantry, from “Reveille” and “Company Drill” through “Guard Duty” and “Preparing for Dress Parade” to “Lights out.” Interestingly, these cartoons appear to blend American and British military dress, seemingly poking fun at the leisure of men who stay in camp. The cover denotes that this booklet sold for “Ten Cents” and is decorated with an etching of a man playing a banjo while resting his head on a dress helmet, accompanied by an avian audience.