Adopted for Conservation by
Linda and Jay Freedman
In honor of Spencer Freedman
on November 16, 2016 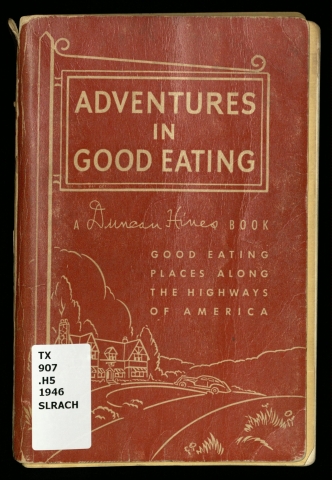 Adventures in good eating : good eating places along the highways and in cities of America

Duncan Hines was neither a baker nor a cook. He was a traveling salesman who ate out a lot. One year with their Christmas card, he and his wife Florence sent out a list of over 100 of their favorite eating establishments. The list was later formally published in 1935 and grew into one of the most respected and used travel guides in the United States. This edition, published in 1946, includes a section recommending domestic wines as alternatives to the post-war European wine shortage in America. Californian wine-greats Paul Masson and Inglenook Vineyards are recommended. DC restarants within include The Occidental ("a favorite with congressmen and diplomats") and Hogate's Sea Food ("...marvelous view of the the Virginia hills, Lincoln Memorial, Washington Monument and Capitol...). Of special interest is the entry for Sanders Court and Cafe in Corbin, KY where fried chicken, county ham, and hot biscuits are served. Hines's celebrity was so great that his name was later branded onto the cake mixes that are still being sold.

A mid-20th century paperback cookbook. The cover has detached from the binding. Conservators will clean and re-line the spine and re-attach the cover. A custom enclosure will be created for this fragile item.