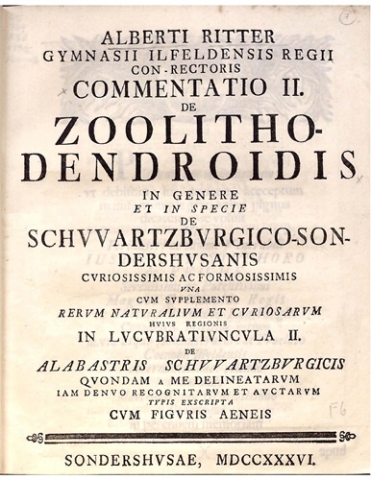 Albrecht Ritter (1684-1748) was in instructor at the royal Stiftscollegium at Ilefeld, Germany. Although relatively little is know about him, he was an early proponent of taking students into the field and learning from direct observation of and experience with the natural world. A member of the Leopoldinian Academy, he wrote several short works on fossils and "formed stones," as fossils were conceived of in the period. This book is on fossil dendrites and alabaster from the Schwartzburg/Sonderhausen region of Germany, and is cited in Emanuel Mendes de Costa's Natural history of fossils (London, 1757). This work is quite rare, held by only one library in the U.S., the Museum of Comparative Zoology at Harvard.