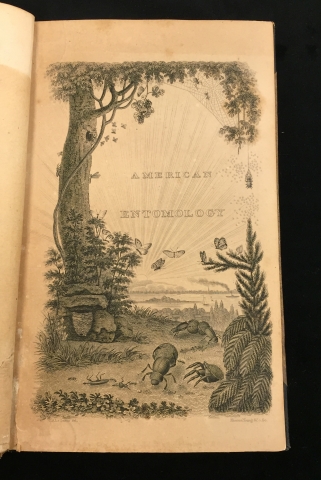 American entomology, or, Descriptions of the insects of North America : ilustrated by coloured figures from drawings executed from nature

By Thomas Say. Philadelphia: Published by Mitchell and Ames, 1817.

Thomas Say (1787-1834) was a self-taught naturalist who has come to be considered the Father of American Entomology.  In 1812 he became one of the founding/charter members of the Academy of Natural Sciences at Philadelphia and actually lived at the Academy and tended its small museum for several years.  He also began publishing this book – part 1 came out in 1817 – but his participation in several scientific expeditions delayed its completion until later in the 1820s.  In this and other works he described and named over 1400 species of insects (especially beetles).

This book has a half bound leather and bookcloth original early 19th century binding.  The pages have been stained with starch and grease after the book was stored with a wedding cake.  Conservators will treat the stains on each page with Gellan Gel to reduce the staining and clean off the starch residue.  This is a new technique in conservation developed over the last several years.  This volume will give our conservators the opportunity to explore this innovative technique.