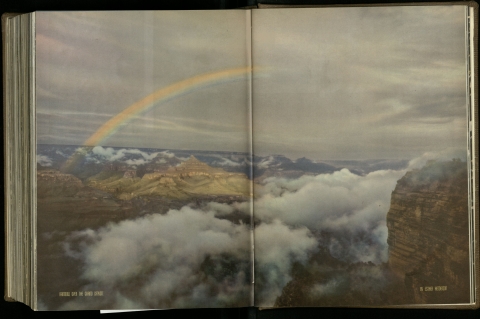 “Civilization Follows the Improved Highway.” That was and still is the motto of the enduring and always alluring travel magazine Arizona Highways.  It was first published in 1925 as an engineering newsletter by the Arizona Highway Department. By the 1930s, it had segued into a magazine documenting the road construction of the expanding highway system throughout Arizona. In the 1940s, the magazine excelled as one of the first color illustrated travel magazines at the forefront of color printing technology.

Arizona Highways attracted not only travel loving readers, but also seasoned photographers like Ansel Adams. Known for his breathtaking black and white landscapes, Adams published some of his first color work in Arizona Highways in mid-1940s. Esther Henderson, Arizona’s first woman photographer of note who also brought the first color printing lab to Tucson, chronicled the lives of local Native American Indian tribes and documented the stunning Arizona landscapes. These World War II era issues of Arizona Highways are splendid examples of color printing and are exceptional documents of the changing Southwest in the glory days of automobile travel.