Aspen: The Magazine in a Box 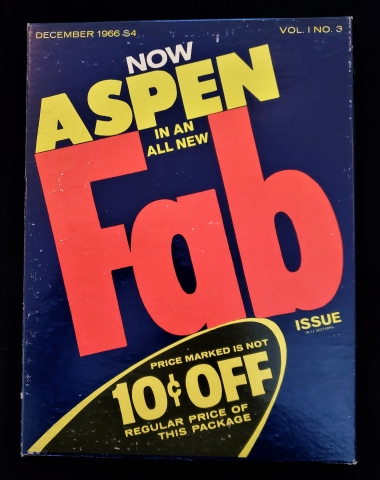 This FAB detergent box in dayglo colors is actually the cover of Aspen: The Magazine in a Box, Volume 1 Issue 3, December 1966. It is one of six issues owned by the Cooper Hewitt, Smithsonian Design Library and was designed by Andy Warhol and David Dalton. As with all the Aspen volumes, this issue has many components in the box, including a flip-book based on Warhol's film Kiss, and Jack Smith's film Buzzards Over Bagdad, a flexidisc by John Cale of the Velvet Underground, and a "ticket book" with excerpts of papers delivered at the Berkeley conference on LSD by Timothy Leary and others. This issue is multimedia magazine in a box since it also contains a record taped at an Aspen 1964 Jazz Party. Each issue was intended to be a time capsule, capturing the culture and events of the late 1960’s. It is a symbol of revolutionary multimedia publishing.