The Assassination of Shaka

The Assassination of Shaka
by Cecil Skotnes 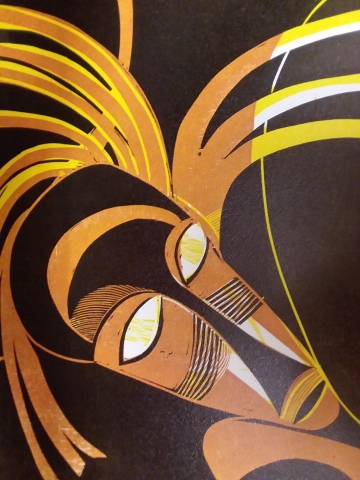 The historical Shaka (circa 1787-1828), the greatest of the Zulu kings, was a brave and skillful warrior who became king in 1817.  Through clever diplomacy, unusual military techniques, and strategic assassination, he controlled an empire of some 200,000 square miles. However, increasing military failure and, ultimately, his mother’s death left him a broken man. To mourn his mother, he imposed a nationwide grieving process so bizarre and destructive that his land was devastated and his people deeply traumatized.  In 1828, two of his half-brothers assassinated him.

The legendary Shaka—known as a daredevil, strangler of serpents and leopards, even “the Black Napoleon”— is depicted in forty-three woodcuts, both black-&-white and colored, each print paired with a passage from an epic poem about Shaka’s life by Stephen Gray. The artwork was created by South African artist Cecil Skotnes, who chose woodcut as the perfect medium to express the power and violence of Shaka’s story as well as the stark brilliance of the Zulu landscape. One image in orange, yellow, and black shows Shaka like a great fig tree whose branches cover the sky. At a time when South Africa’s apartheid government suppressed the history of indigenous Africans or treated it as barbaric, Skotnes recognized the mythic quality of Zulu oral history and depicted Shaka as a culture hero.