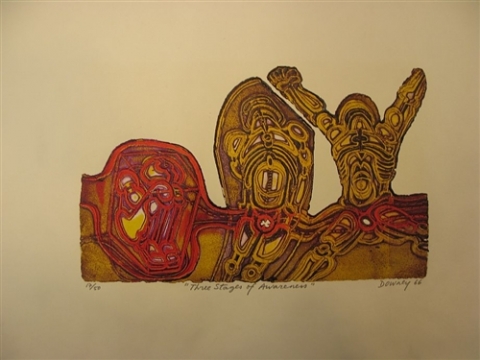 Born in Chile, but settling in the United States in the mid-1960s, Juan Downey (1940-1993) explored many different art media. Although he became primarily known for his video art, he also created in other media, including painting, installations, and printmaking. Early in his career he studied in Chile, Spain, and then Paris, France where he focused on printmaking and painting. His early work already shows his interest in energy and concerns with navigating his Latin American heritage with his adopted home and ideals. He is now recognized as one of the earliest adopters of video art, which especially enabled him to explore invisible energy in his work. This limited-edition portfolio consists of six color etchings created when the artist was living in Washington, D.C. It is accompanied by text written by the Argentine poet Rafael F. Squirru (1925-2016).