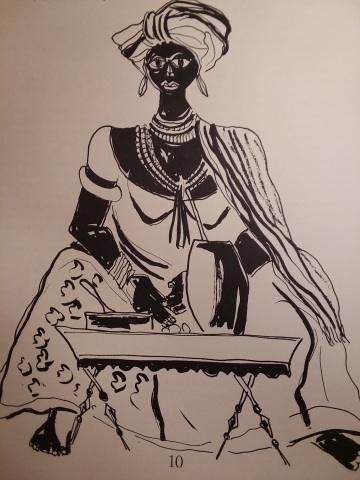 Carlos Páez Vilaró (1923-2014), born in the vibrant, multicultural city of Montevideo, Uruguay, was a self-taught, tirelessly creative painter, potter, sculptor, composer, architect/builder, and writer. He began his artistic career at age 16, sketching nightlife in the bars and cabarets of Buenos Aires. His lifelong preoccupation with African themes began back in Uruguay with the Afro-Uruguayan music and dance traditions elaborated by the descendants of African slaves and called Candomblé.

Moving on to Bahía, Brazil, he was struck by the intensity of Afro-Brazilian culture, most evident in its mystical, frenzied religion, Candomblé (meaning “dance in honor of the gods”). As a friend said, “To be in Bahía is to be in Africa.” The artist transferred his quick, nervous sketches directly onto the printing plates. This copy is number 995 of an edition of 1000, signed by the author.

A mid-20th century volume. The binding consists of plain boards and a simple cloth spine covered with a decorative paper jacket. The jacket is torn in multiple locations and no longer functioning on the cover. The sewing is failing and the pastedowns are separating from the cover. The thin cloth spine is also detaching.  Conservators will remove the spine, resew the textblock, and reattach the pastedowns to the boards. The paper jacket will be repaired using Japanese paper adhered with reversible paste. A protective enclosure will be created for this delicate item.