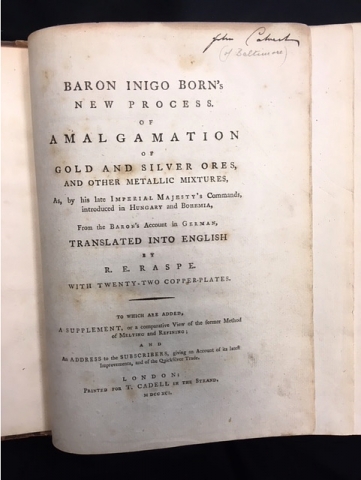 Adoption Amount: $950
Category: Build and Access the Collection
Location: Dibner Library of the History of Science and Technology

Baron Inigo Born's New process of amalgamation of gold and silver ores, and other metallic mixtures as by his late Imperial Majesty's commands introduced in Hungary and Bohemia / from the Baron's account in German, translated into English by R.E. Raspe

A new process for refining gold and silver from various ores is described for the first time in English in this text. The amalgamation process was invented by Baron Ignaz Edler von Born (aka Inigo Born), and after a trial of the process was conducted in front of observers in Schemnitz, Slovakia, the book describing the process was published in 1786. It was then translated by Rudolf Erich Raspe, a ne’er-do-well who was originally from Germany. Appointed as Professor of Archaeology at the Collegium Carolinum in Cassel, Raspe sold objects from the Landgrave of Hesse medal collection for his own personal profit. When his activities were discovered he fled to England where he took a position in mining engineering. Shortly thereafter, he moved to North Scotland and began planting gems in mines to convince the local magistrates to fund their refinement. It was while operating this mining scam that he translated the Baron's book into English. When his deception was exposed, he fled the authorities again, this time to Ireland, where he contracted scarlet fever and died in 1794.