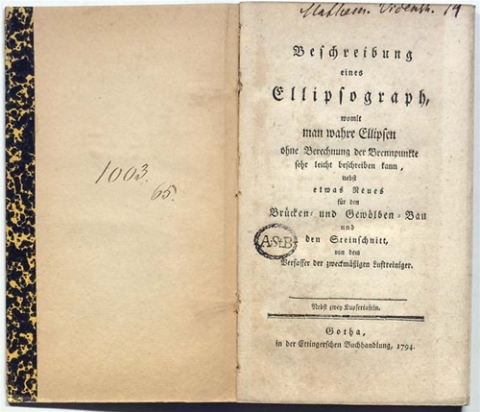 Adoption Amount: $800
Category: Build and Access the Collection
Location: Dibner Library of the History of Science and Technology

A superb monograph on the theory, construction and use of a mechanical drawing device to describe ellipses. The author, Georg Friedrich Parrot (1767  1852) was a German scientist, the first rector of the Imperial University of Dorpat (University of Tartu), being elected by the University Council consisting of all chaired professors. In this capacity, Parrot skillfully fought for the academic freedom and the self-government of the university, protecting her from the political pressure of Baltic German barons who had been given the right to autonomously govern in the Baltic provinces. The university was opened on the initiative of the local aristocratic establishment but they disliked Parrot for his unconcealed sympathy to the ideals of the Enlightenment. Parrot openly talked about equality of people, irrespective of their social status and heritage. In 1811, Parrot was elected to be a corresponding member of the Academy of Sciences of St. Petersburg, becoming a full member in 1826. In the same year, he retired from the University of Dorpat and continued his work as a head of the physics laboratory of the Academy of Sciences in St. Petersburg. He died on a trip to Helsingfors (Helsinki), in 1852.