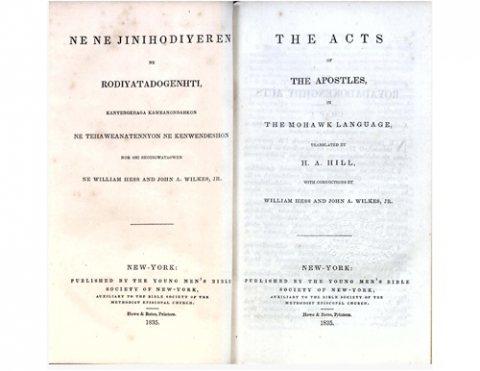 Native American languages have been a central research interest at the Smithsonian since the late 1800s when anthropologist John Wesley Powell founded the Bureau of American Ethnology and (who is he?) James C. Pilling compiled his still-authoritative bibliographies on Native American linguistic families. This volume contains the texts of 17 separately published books of the New Testament in Mohawk: the Gospel of St. John; the Acts of the Apostles; 14 Epistles of Paul, John, James, and Jude; and finally the Revelation of John. H.A. Hill, the translator of some of them, was a Mohawk catechist (missionary's assistant) to the Six Nations Reserve, and his translations are considered linguistically significant. SIL actively collects such publications for researchers at the National Museum of Natural History.