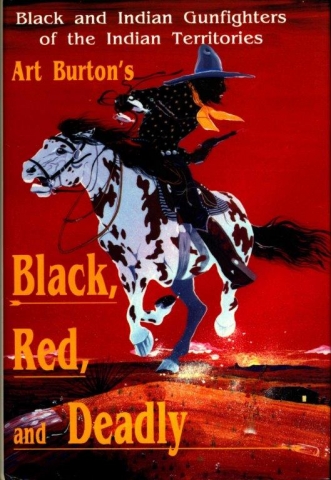 Black, Red, and deadly : Black and Indian gunfighters of the Indian territory, 1870-1907

You may know the names of Jesse James, Billy the Kid, or Pat Garrett. But what about Buss Luckey, the Rufus Buck Gang, the Lighthorsemen, or Zeke Miller? Although whites dominate popular depictions of the lawless west, Black, Red and Deadly presents the sagas of African-American and American Indian outlaws and bona fide law enforcers in Indian Territory. Luckey was an African American convicted bandit who dynamited a train carrying $60,000 in gold bullion. On the good side, there were Cherokee, Choctaw, and Creek Lighthorse units who served as mounted police; and, Miller was a deputy U.S. Marshall. The stories of these lesser known heroes and villains is historically fascinating! Black, Red and Deadly’s numerous photographs document the African American and American Indian individuals who ran against the law and those who sought to execute peace and safety. Truly an exciting read and unique contribution to western history.