Adopted by
Carmen Deedy
In honor of Laura Amy Schlitz
on April 8, 2021 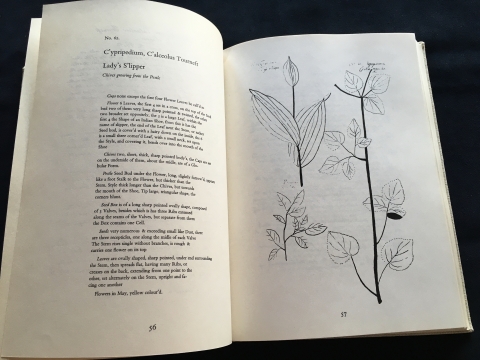 Botanic Manuscript is the legacy work of Jane Colden (1724-1766), considered America’s first woman botanist when New York was still a British colony. From a young age into adulthood, Colden enjoyed botanical studies and plant collecting at her family’s estate called Coldengham near Newburgh. Her father was Cadwallader Colden, surveyor general, lieutenant governor, and acting governor of the Province of New York. An amateur botanist himself, he saw she had an aptitude for botany and taught her the new Linnaean plant classification system. He also corresponded with botanists John Bartram, Alexander Garden, and Peter Kalm of Sweden on Jane’s behalf to exchange specimens and seeds.

Fifty-seven plants, all native to the future United States are described in this facsimile edition. Her handwritten descriptions are reproduced along with a transcription of the handwritten words and plant illustration of plant parts such as leaves, flowers, etc. Ironically the original work is no longer in the United States. It found its way to Europe after the American Revolution and into the 19th century. Eventually it was given to botanist Sir Joseph Banks who gave his book collection to the British Museum (Natural History) in London, England when he died in 1820.