A Box of Smile 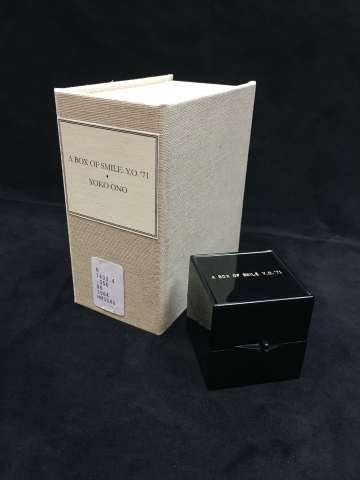 This multiple was created by George Maciunas, ostensible leader of the avant-garde movement Fluxus, in conjunction with Yoko Ono’s 1971 retrospective This is Not Here at the Everson Museum of Art in Syracuse, NY. Yoko Ono, artist, peace activist, and widow of John Lennon has used smiles as a recurring theme since the 1960s. "It is the simplest thing to make yourself healthy and make others feel good," she says about smiling. (Reuters.com) Issued in both black and white, the plastic box is gold stamped A BOX OF SMILE Y.O. ’71, and opens to reveal a mirror with the viewer’s reflection, invariably invoking a smile. In 1984, four years after her husband’s death, Ono authorized a continuation of the edition from the remaining 1,170 unnumbered copies. New mirrors were inserted and the boxes were stamped on the underside with ReFLUX to distinguish from the earlier edition. “I just wanted to have a box that people can look into, and when they are sad and angry and all that, just see how it looks smiling. When John passed away and I was feeling so drab about it, and I looked at the mirror and I looked horrible. So I really put myself into smiling. And so I created something that worked for me, afterwards.” (MoMA)