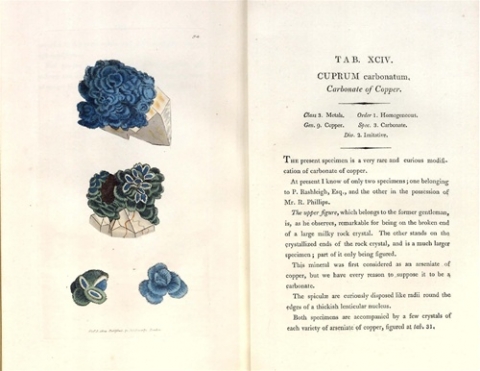 British mineralogy, or, Coloured figures intended to elucidate the mineralogy of Great Britain

James Sowerby's British Mineralogy is the first comprehensive illustrated work on mineralogy. Though more than 200 years old, in many ways it has never been superceded. It was issued in parts over 15 years and ultimately contained 550 plates meticulously drawn from actual specimens, engraved and brilliantly colored by Sowerby himself and members of his naturalist/artist family accompanied by descriptive text. It is by common consensus "the supreme work of British topographical mineralogy, [and] the most ambitious colourplate work on minerals ever published" (Conklin). When it first appeared in 1802 scientists were just beginning to analyze the composition of minerals; thus it connects directly with the career of James Smithson, whose bequest served as the funding to create the Smithsonian Institution. James Smithson was a pioneer in the chemical analysis of minerals and the Smithsonian Libraries still holds his personal library today. Smithson's colleague Sir Humphrey Davy, for example, carried out analyses of many of Sowerby's specimens in his research on their chemical composition. The list of lenders and donors to Sowerby's collection includes Wollaston, Tennant, Heuland, and others whose works, often inscribed to him by the authors, Smithson acquired and studied. Sowerby organized his collection according to Hauy's system, a further link with works in Smithson's library.