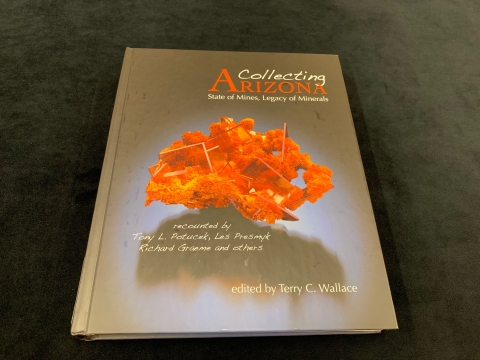 Released for Arizona’s Centennial Year in 2012, this book celebrates the state, the beauty of its minerals, and the heritage of its miners and collectors. Breathtaking color photographs enhance the tale of a state with an exceptional bounty of minerals – silver, gold, azurite, malachite, turquoise, amethyst, and many more. The copper mines are some of the most productive in the world; there is an impressive list of minerals that were first discovered within Arizona. The book provides helpful geography and geology to put the minerals into their natural context, but its main focus is on the history associated with discovering, mining, and collecting each of the beautiful specimens. This is a must-read for “rockhounds." The book's authors are just as varied as the materials they discuss. Tony Potucek is a retired geological engineer who loves “mineral collecting, writing, backpacking, birding, and traveling.” Les Presmyk is a mineralogist, engineer, and active collector of Arizona minerals. Richard Graeme spent his 55-year career in the mining industry, loves collecting, and was honored by having the mineral Graemite as his namesake.