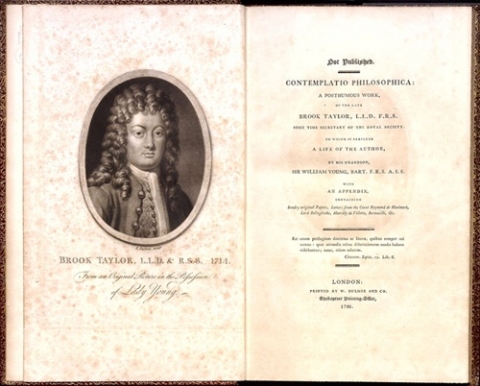 Adoption Amount: $1,850
Category: Build and Access the Collection
Location: Dibner Library of the History of Science and Technology

Contemplatio philosophica : a posthumous work of the late Brook Taylor, L.L.D., F.R.S. ... ; to which is prefixed a life of the author

First edition of this posthumous work, printed for private circulation by Brook Taylor's grandson, Sir William Young (d. 1815), in 100 limited copies. It is prefaced by the life of the author. This original work is the major source of Taylor's biographical data as well as the only edition of his philosophical book. Taylor, English mathematician, is best known for the mathematical concept of the "Taylor series" and contributions to the theory of finite differences. Taylor was elected a fellow of the Royal Society early in 1712, and in the same year sat on the committee for adjudicating the claims of Sir Isaac Newton and Gottfried Leibniz, and acted as secretary to the society from 13 January 1714 to 21 October 1718. From 1715 his studies took a philosophical and religious bent. He corresponded in that year with the Comte de Montmort on the subject of Nicolas Malebranche's tenets. Unfinished treatises, On the Jewish Sacrifices and On the Lawfulness of Eating Blood, written on his return from Aix-la-Chapelle in 1719, were afterwards found among his papers.