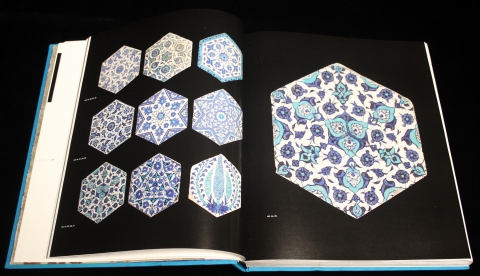 Tiles and ceramics produced in Iznik between the 15th and 17th centuries represent a significant artistic achievement for Turkey. Tiles were frequently used as decoration in Turkish Seljuk period (1071-1243 AD) architecture for important public buildings. Beginning with the Ottomans in the 15th century, there was increasing demand for tiles, which were used to decorate the mosques and palaces of their new capital of Istanbul. This led to the establishment of a center for ceramic production in Iznik. At the height of Iznik tile production there were as many as 300 workshops in the town of Iznik. Today, examples of Iznik tiles and ceramics are found in major museums in Turkey and around the world. Two important collections of Iznik tiles and ceramics, one in the private Sadberk Hanım Museum and the other the private collection of Mehmet Omer Koc have been brought together for this exhibition catalog. The catalog illustrates over 300 examples of Iznik tiles, ceramic bowls, and ornaments. It presents a picture of the development of Iznik ceramics and tiles from the early Ottoman period to the second half of the 17th century.  These ceramics served both as beautiful and functional objects, their production playing an important role in the Ottoman economy. Their study is important both for architectural and decorative art scholars. The catalog is a major step in presenting the depth and breadth of the art of Iznik tiles.