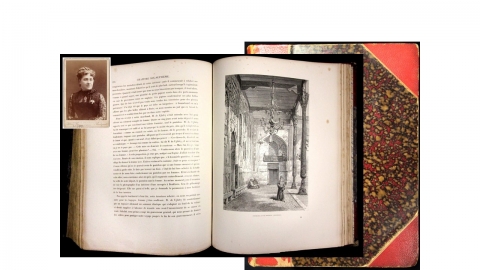 A travelogue written of Marie de Ujfalvy-Bourdon, De Paris à Samarkand, was published in 1880. Marie de Ujfalvy-Bourdon (1845- 19?? ) traveled with her husband, Károly Jenő Ujfalvy de Mezőkövesd (16 May 1842 – 31 January 1904) who was a noted ethnographic researcher and linguist of Central Asia and the Himalayas. In 1876 he was sent by the French Ministry of Public Education on a scientific expedition to the newly conquered regions of Russian Central Asia. Marie accompanied him on the journey, something that was extremely rare for a woman of that time to do. She recorded their travels. Additionally, some of Mme de Ujfalvy-Bourdon’s illustrations are included in the book.