A Descriptive Catalogue of the Marine Reptiles of the Oxford Clay, Pt 1 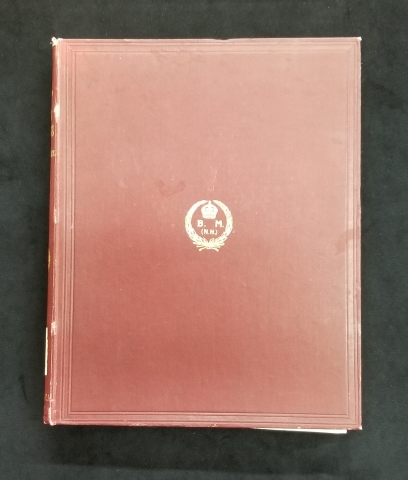 A descriptive catalogue of the marine reptiles of the Oxford clay. Based on the Leeds Collection in the British Museum (Natural History), London, Part 1, v. 1

By British Museum (Natural History). London: Printed by order of the Trustees, 1910-13.

This volume, part one of two, was given to the Smithsonian in 1910 right after it was printed by the Board of Trustees of the British Museum. Inside the front cover of each of the two books is a plate stating that it was “Presented by the Trustees of The British Museum” and that it is “No. 23 of 25 copies”, and was “printed on special paper.” This is book one of a two part set that discusses Ichthyosaurs and Plesiousaurs. The detailed and scholarly catalogue describes the collection of prehistoric marine reptile specimens found in the Oxford Clay of Peterborough and collected by the British Museum (Natural History) in London.  Ichthyosaurs and Plesiousaurs are discussed in Book 1, and Pliosaurs and Crocodiles in Book 2. Accompanied by detailed charts and drawings, each section discusses a particular species or subset of the reptile families of the Upper Jurassic. According to the introductory notes, the quality of the museum collection, and of the manner in which it was assembled, are exemplary.

Mr. Charles William Andrews (1866 - 1924), this book's author, was a British paleontologist associated with the British Museum. He specialized in vertebrates, both in the museum and as a field researcher.

This is an early 20th century cloth bound volume.The textblock is split in two. Conservators will clean the spine and re-attach the two sections of the textblock. The spine will then be re-lined with airplane linen. The repaired textblock will then be re-cased in the original cover.