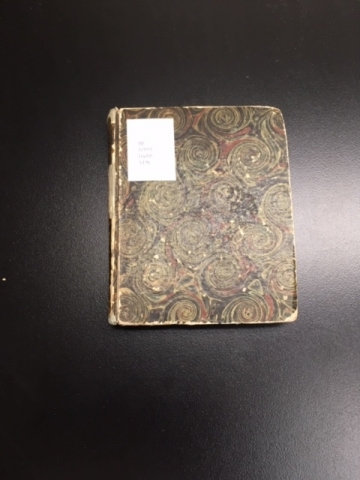 This is a series of four palm sized books written in German. Each begins with a portrait of the King of Wurttemberg, whose kingdom predates the German Empire. (The Kingdom of Württemberg existed from the end of the Napoleonic Wars, in 1805, to the end of World War I, in 1918.) The volumes in the National Postal Museum Library span ten years, from 1843-1853. This was during the reign of William I, who took the throne at age 35 and reigned for 47 years. Each title in this series translates, “German post almanac for the year…” The author of these books (who lived from 1813-94) was a German post office worker. He is also the author of many publications on German postal history.

This is a late 19th century marble paper bound volume. The paper is wearing, particularly at the corners and board edges. The binder's board is exposed and splaying at the corners. Conservators will consolidate the corners and cover exposed areas with toned Japanese paper. An acid free enclosure will be created to house this delicate item.