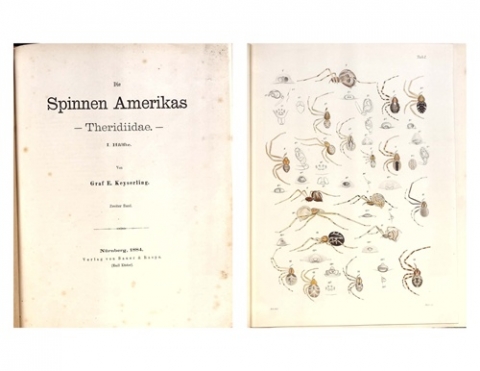 The Russian Count Eugene von Keyserling (1833-1889) spent his career in the natural sciences specializing in spiders. His publications focus primarily on the spiders of North and South America, and Die Spinnen Amerikas constitutes his magnum opus, describing hundreds of species new to science. It also contains 58 lithographed plates (43 colored) and is considered one of the finest iconographies of arachnids ever published. The book came out in six parts over 14 years; the last two parts were edited by George Marx, whose collection resides in the National Museum of Natural History and is the subject of on-going research in identifying the type collections and clarifying designations.