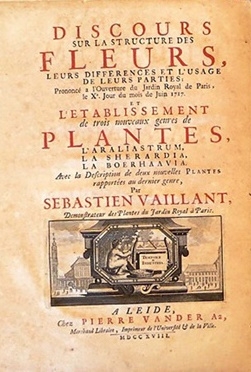 This short publication by a little-known botanist gave Linnaeus the diagnostic tools and the anatomical terminology for his sexual system of classifying plants. After studying botany under Tournefort at the Jardin des Plantes in Paris, Vaillant (1669-1722) established a herbarium there and showed such talent and dedication that over time he rose through the ranks to become the director. This publication is his inaugural address for the opening of a new portion of the Jardin in 1717, in which he described his observations of the reproductive characteristics of plants "identifying the stamens as the male organ of the flower  and established beyond dispute the sexuality of plants. This work greatly influenced Linnaeus as a student, and he subsequently used the differences between the stamens and pistils of flowers to organize his own sexual system for classifying plants. There are reportedly some copies of this work dated 1717, so this 1718 copy represents a second issue.