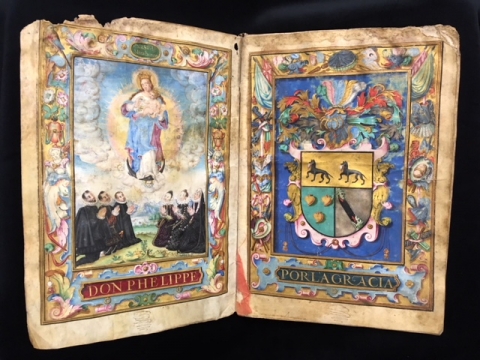 Adoption Amount: $5,100
Category: Preserve for the Future
Location: Dibner Library of the History of Science and Technology

This is a brilliant example of an early 17th-century Spanish petition relating to nobility, similar in style to examples from Granada. The rank of Baron is signified by the five helmet bars in the crest on the coat of arms full-page miniature. To the left is another full-page miniature, likely of the Coronation of the Virgin with King Philip III in attendance. The use of bright red, blue, green, and gold demonstrates the wealth and power that stood behind the petition. The political content is adorned with illuminated butterflies, birds, and flowers, and the volume includes a red silk ribbon page marker. Currently in the original limp vellum binding with exposed sewn bands, this manuscript was likely originally accompanied by an extravagantly decorated box with the official lead seal of the king.

This is an early 17th-century vellum volume with an exposed spine sewn on six cords. The last section is nearly detached. There is a decorative braided cord down the spine of the book. The volume suffers from mold damage throughout, including on the illuminations. The mold damage has caused loss to the corners and edges of the first 20 pages of the text. Conservators will treat the volume for mold. After mold remediation, the areas of black mold will be cleaned. The areas of loss to the corners will be filled. Finally, an acid-free double-tray box will be created to house this fragile item.