The Gospel According to Mark...in the Language of the Dakotas = Wotanin Waxte Markus Owa Kin Dee 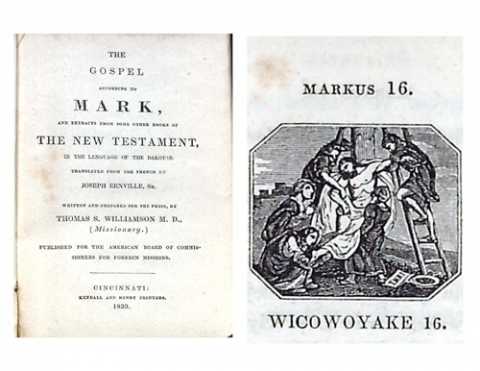 The Gospel according to Mark, and extracts from some other books of the New Testament, in the language of the Dakotas

This is one of the earliest and rarest works in the Dakota (Sioux) language. The text includes all sixteen chapters of the gospel of Saint Mark. It was created by having missionary Thomas Williamson read from the Book of Mark in French, which was then translated into Dakota by Joseph Renville, the son of a French-Canadian fur-trader father and a Dakota mother. Renville served as an interpreter for Zebulon Pike's 1805 expedition to find the headwaters of the Mississippi and for Stephen Long's expedition to the Rocky Mountains in 1823, and "...nearly all the translations into the Dakota language up to the time of his death [1846] were either made or supervised by him..." (Pilling, Siouan). SI has had a major research interest in Native American languages from its earliest days, and our collection of printed works in the subject is unparalleled. Anthropological linguist Dr. Ives Goddard strongly supports the acquisition of this book, noting that "this is a significant early publication that belongs in SIL's collection." Only eight copies of the book are known in U.S. libraries (the closest being in Buffalo, NY).