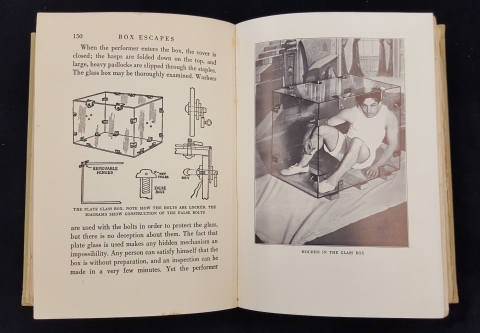 In 1926, world-famous magician Harry Houdini died of peritonitis following a ruptured appendix. Before his death, he had planned to write several books on varied subjects, including his own career and magical secrets. Fortunately, he had discussed these ideas and shared his notes with Bernard Ernst, president of the Society of American Magicians. Ernst arranged for Walter B. Gibson— a fellow magician, the creator of the pulp fiction character The Shadow, and Houdini's ghost writer— to prepare Houdini’s Escapes.

If you're hoping to learn the secret of the Chinese Water Torture Cell, you’re out of luck. Some of Houdini’s best-known tricks were redacted from this work after review by the Society of American Magicians' Committee on Exposures. But many other tricks are explained, often with illustrations showing how the master magician managed his spectacular escapes. Our first edition copy is housed at the National Museum of American History Library.