How to Mix Drinks 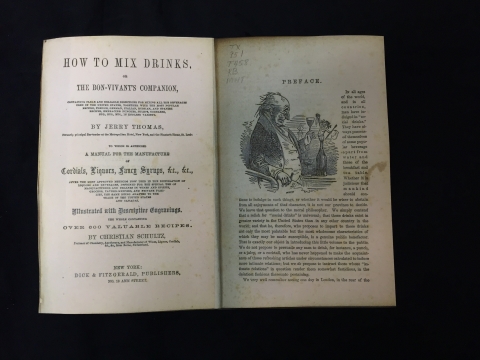 Adoption Amount: $3,000
Category: Build and Access the Collection
Location: Dibner Library of the History of Science and Technology

How to mix drinks; or, The bon-vivant's companion, containing ... directions for mixing all the beverages used in the United States, together with the most popular British, French, German, Italian, Russian, and Spanish recipes

Collecting and standardizing what had been until then a hodge-podge of oral traditions and regional customs, this was the first recipe book for mixed drinks published in the United States.  Jeremiah Thomas (1830-1885) was a bartender who owned various saloons in New York City and worked in others in California (during the Gold Rush), St. Louis, Chicago, Charleston, and New Orleans.  In this first edition of his book he established the recipes for popular cocktails of the day, including fizzes, flips, sours, punches, and many others; later editions provided the first written recipes for the Tom Collins and the drink that evolved into the martini.  Thomas is considered the “father of American mixology,” and in 2003 a celebration was held at the Plaza Hotel in New York, to honor him and make the cocktails – some famous, some forgotten – that he described in his book.