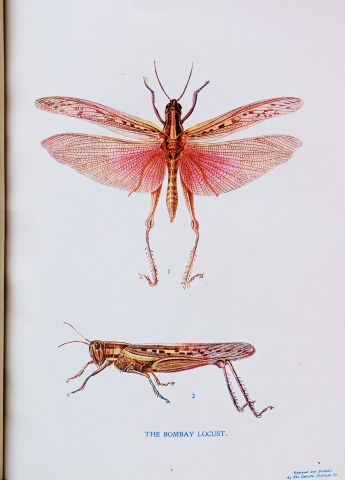 Indian insect life; a manual of the insects of the plains (tropical India)

With classic British understatement, Harold Maxwell-Lefroy (1877-1925) describes this two-volume, 800 page guide as an “imperfect” attempt to describe the insects of the Indian subcontinent. Published in 1909, Indian Insect Life is “largely a product of [Maxwell-Lefroy’s] spare time and scanty holidays.” One wonders what he would produce if he were able to devote his full time and energy.

Harold Maxwell-Lefroy was the first Imperial Entomologist in British India and founded the Imperial Agricultural Research Institute in Pusa. Indian Insect Life was an early indication of the seminal information to come from the Institute. For years, Maxwell-Lefroy convened meetings with scientists from across India; their work formed the intellectual foundation of Indian entomology.

These volumes are richly illustrated by F. M. Howlett, Second Imperial Entomologist, and local Indian artists. Our copy comes from the library of noted entomologist and parasitologist, Harry Hoogstraal.