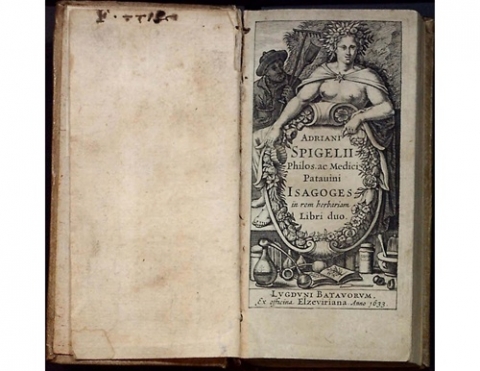 A professor of anatomy and surgery at the University of Leiden, Adriaan van de Spiegel (1578-1625) also studied botany, and his Isagoges in Rem Herbariam Libri Duo is an early work on plant classification. Linnaeus, who established the modern system of scientific nomenclature, held Spiegel's book in high regard and named a genus of flowering plants Spigelia in his honor. In addition, Spiegel's is the first book to give detailed instructions for forming a collection of dried plants and will be a particularly early addition to SIL's collection of works on collecting and preserving natural history specimens. Bound with Spiegel's text is Adolphus Vorstius' catalog of the botanical garden of the University of Leiden. Founded in 1587 as a "physic garden," it focused on herbs and medicinal plants, including many species from the Americas, notably Brazil, the Virginia colony, and Canada. Adolphus Vorstius (1597-1663), as a professor of medicine at the University, was intimately familiar with the garden and gave lectures in it every week, describing the nature and qualities of each plant in a chosen bed. His catalog of the plants was first published in 1633, as here, and was updated and republished every few years (1636, 1643, 1649, 1658, and 1663) until his death.