A Large Dictionary English and Dutch

Adopted by
Ingrid Rose
In memory of Milton Rose
on March 15, 2021 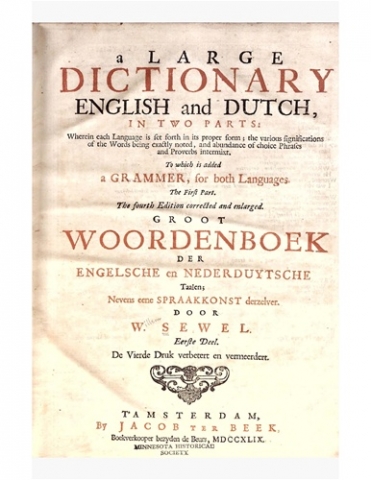 A large dictionary English and Dutch, in two parts ... : to which is added a grammer, for both languages = Groot woordenboek der Engelsche en Nederduytsche taalen : nevens eene spraakkonst derzelver, The fourth edition, corrected and enlarged

The Joseph F. Cullman 3rd Library of Natural History has been building a collection of foreign language dictionaries from the same time periods as the books in our rare collections (16th through 19th centuries) so that researchers can consult contemporary sources when reading and translating the books. Latin, Dutch, German, French, and Spanish have been the top priorities, with Swedish, Portuguese, and Italian as a second-tier. For 18th century Dutch, we recently bought the 4th edition of Sewel's English-Dutch dictionary, first published in 1691. A recognized classic in its field, it also contains a grammar for both languages and other prefatory material and was still in print in the 19th century.