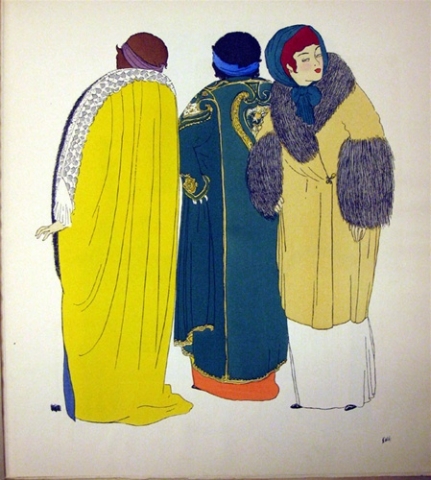 The popularity of the French fashion plate was revitalized in the early part of the 20th century by artists like Paul Iribe (1883-1935), working with fashion designers such as Paul Poiret. These illustrations were hand colored using the pochoir process, whereby stencils and metal plates are used allowing for colors to be built up according to the artist's vision. The fashion plate, in use for some time, was in essence an advertising toola piece of artwork used to create desire for the latest styles aimed at an audience of the fashionable and moneyed. The innovative and famous couturier, Paul Poiret recognized Paul Iribe's talent and brought him in to create drawings, which would compellingly represent the new designs in his collection. These illustrations were later compiled into this album,"Les Robes de Paul Poiret racontée par Paul Iribe" published in 1908.