Adopted for Conservation by
Jerry Birchmore
on October 8, 2015 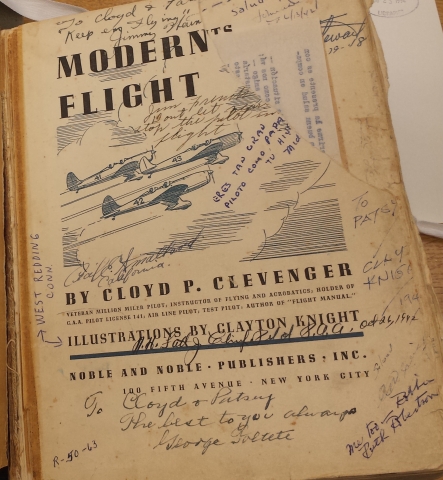 This book is unique in that it was a well written and illustrated text on flight training that had many owners written by a man who was the embodiment of the early 20th century airplane pilot and adventurous nomad. Cloyd P. Clevenger began flying gliders as a high school boy in Oakland, California. He was an instructor at March Field in the World War, then for the next forty years he had every kind of flying job imaginable: teacher and text writer, stunt man, skywriter, transport pilot in World War II. He flew in the 1927 and 1928 tours, retired a long time later in Mexico, died in 1964.  This book but contains numerous autographs of fellow flyers like Charles Lindbergh and memorabilia (notes, letters, photos) of the period and is in dire need of extended care and preservation.

Conservators will create a double tray box to house this item and prevent further damage to this valuable item.