Notes and descriptions of specimens collected on the Philippine Expedition of the Steamer Albatross, circa 1908 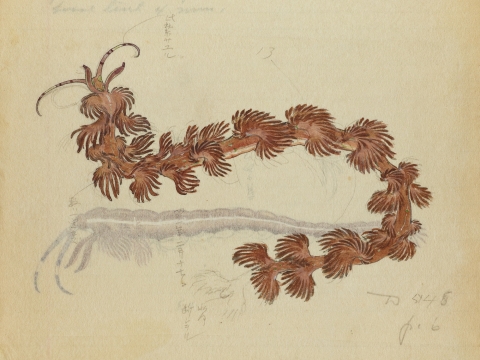 Notes and descriptions of specimens collected on the Philippine Expedition of the Steamer Albatross, circa 1908

Despite being home to a great variety of species, the Philippines was not the place to conduct research at the turn of the twentieth century. The Pacific Ocean archipelago was affected by the Spanish-American War of 1898 and an insurrection that continued until 1903. However, by 1907, the situation had stabilized and the United States was eager to begin exploring the Philippines’ flora and fauna. Smithsonian assistant curator Paul Bartsch joined 69 other participants in the Philippine Expedition traveling aboard the 25-year-old research vessel Albatross. Among the many specimens Bartsch observed and collected were nudibranchs, a type of marine Gastropoda. His notes and descriptions include highly detailed watercolor illustrations by Kumataro Ito.

Discover more about this field book and additional Paul Bartsch materials in this collection.