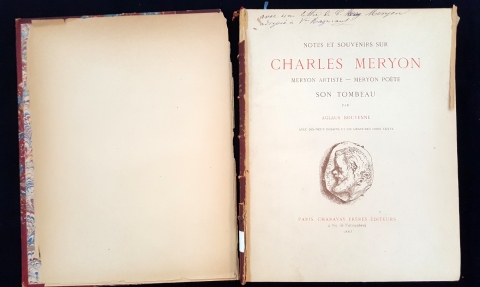 Adoption Type:
Preserve for the Future

Charles Méryon (1821 –1868) was a French artist and poet who worked almost entirely in etching, as he suffered from colour blindness. Although now little-known in the English-speaking world, he is generally recognised as the most significant etcher of 19th century France. He wrote in verses which were designed to be published alongside his images, expressing the thoughts and feelings the subjects aroused in his mind, and considered himself a poet. His most famous work is a series of views of Paris a series of etchings called "Eaux-fortes sur Paris." He lived in poverty, suffered from mental illness and hallucinations and was committed to the Charenton mental institution at Saint-Maurice. Despite the support of Felix Bracquemond and the admiration of such figures as Baudelaire, Gautier, and Victor Hugo, he recovered briefly but then went into a decline, died and was buried in the Cemetery of Charenton. This book (whose title translates to Notes and Remembrances on Charles Meryon, his Tomb at the Cemetery of Charenton Saint Maurice) is a testimony to his writing, work, and art, and the tomb designed in the cemetery, which sadly is bare of ornament or markings now.

This book has a late 19th century half bound leather and marbled paper binding. The front board is detached and a piece of the spine is missing. The volume contains a letter from the artist and an artist's proof that has been hinged into the binding. Conservators will re-back the volume and re-attach the front board. The letter will be placed in a Mylar L-sleeve. The artist proof hinge is tenuous and may be replaced if that causes no damage to the plate. A double tray box will be created to house the volume and its contents.