Adopted for Conservation
in honor of Michael John Willey
on October 20, 2019 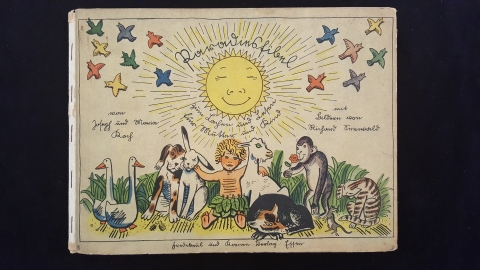 A rare illustrated German nursery rhyme children’s book, Paradisefibel features colored illustrations by Richard Seewald (1889-1976), a German visual artist. With highly stylized illustrations, this fairy tale includes humorous animals in human situations, such as singing frogs and playing monkeys. Written by husband and wife Joseph and Maria Koch, the rhythmic flow of the text works in conjunction with Koch’s development of the “finger-reading” method of sign language. This text was used to teach children sign language and stands as a treasure for children’s book enthusiasts and educators alike.

This book has an early-20th century German staple binding. The spine is missing and the staples have oxidized.  Conservators will remove the staples. The single sheets of the tetxblock will be guarded to make sections and the sections resewn through the fold. The textblock will then be recased in the repaired original binding. A custom enclosure will be created for this fragile item.