Adopted for Conservation by
Patricia Henkel
on June 25, 2019 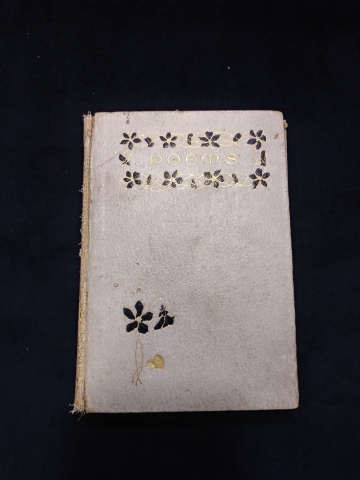 Frances E. W. Harper was a lifelong writer and poet, whose work illuminated both the causes of abolition and the fight for civil rights, as well as the humanity of African Americans. Many of Harper’s published works reflected her activism; poems such as “The Slave Mother” echoed her abolition work. She helped organize the National Association of Colored Women in 1894 alongside Mary Church Terrell. This volume of poems includes pieces such as “Jamie’s Puzzle,” where a young boy tries to come to terms with the death of his grandmother and mother. The poems also reflect her Christian beliefs, society’s hypocritical actions towards women (such as “A Double Standard” and “Vashti”), and the necessity of humane treatment of others, especially children. The poem “An Appeal to my Countrywomen” encompasses all these themes and reflect her later deeds towards suffrage and civil rights.

This volume has an early 20th century publisher's binding with a decorative cover. The spine is missing. The tetxblock is intact. Conservators will clean and reline the spine, adding new endpapers to the textblock. The cover will be repaired using airplane linen toned to compliment the original cover color.