Sinking of The "Titanic" 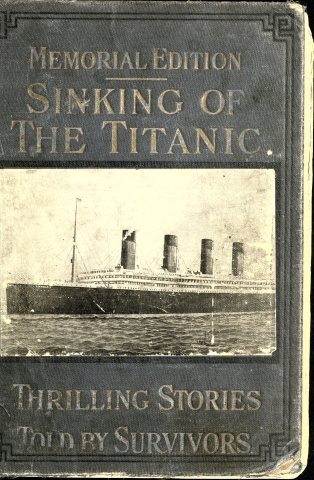 Sinking of the "Titanic," most appalling ocean horror; with graphic descriptions of hundreds swept to eternity beneath the waves ... comp. from stirring stories told by eye witnesses ...

How fast could you write a 300 page book? Sensationalist journalist Jay Henry Mowbray turned out this edition of Sinking of The "Titanic" (complete with illustrations and ready for sale) by May 11, 1912, less than one month after the ship struck that infamous iceberg. Speed puts this book into a curious genre—the “instant book.” The instant book narrates a contemporaneous event through a collage of sources, like government hearings or embellished descriptions, coalesced by journalists, then sold door-to-door as soon as possible. But why the need for speed? Like today, the American public had a voracious desire for every detail of their national tragedies. But they didn’t have the access to information, especially in depth, as we do in today’s internet age. Instant books like Sinking of The "Titanic" sated that desire, but they had to be distributed quickly, before popular interest in the subject faded.

This book features early-20th century publisher's binding bound in navy blue bookcloth with gold lettering on the front cover. The cover has a photograph of the Titanic adhered to it. The cover and photograph are heavily abraded. The spine is torn at the gutter and across the middle of the spine with areas of loss at the head and tail. The front cover is detached and the sewing is failing.  Conservators will remove the cover and repair the spine and cover. The textblock will be resewn and the repaired case reattached to the textblock. A custom enclosure will be created to protect the photograph on the cover from further abrasion.