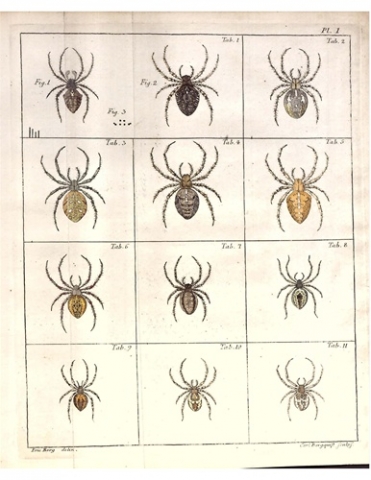 A member of the minor Swedish nobility, Clerck was a friend and correspondent of Linnaeus. He studied spiders, publishing his identifications and analyses in the present work along with observations on their behavior. In Swedish and Latin, it describes and illustrates 70 species and is a classic of arachnology; indeed, it is the founding text on spider nomenclature. It has the unique distinction of being accepted by the International Commission on Zoological Nomenclature (ICZN), despite having been published the year before the 10th edition of Linnaeus' Systema naturae (1758), which is otherwise considered to be the starting point for modern scientific nomenclature. It is a most useful work for the active research program on NMNH's spider collections.