Synopsis of the Accipitres (Diurnal Birds of Prey) 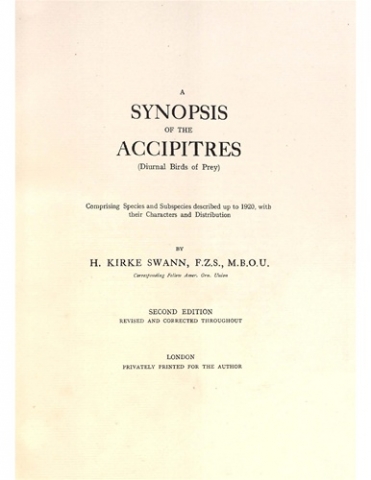 A synopsis of the Accipitres (diurnal birds of prey) : comprising species and subspecies described up to 1920, with their characters and distribution

Harry Kirke Swann (1871- 1926) was an ornithologist, author, bibliophile, book dealer, and publisher. Since 1921 he was the de facto owner of Wheldon and Wesley, the publishing and antiquarian book firm that attained a legendary status among natural-history book collectors (and served as the Smithsonian's European book agent from the 1860s until about 1960). Swann originally published his Synopsis of the Accipitres in four octavo parts, without plates (London: Wheldon and Wesley, 1919-20); a second edition (1921-22), revised and corrected, was again in octavo and without plates. However, Swann also privately published a large-paper folio version of the second edition, adding 22 colored plates of eggs. The print run was limited to only 28 copies, of which the present copy is no.15.